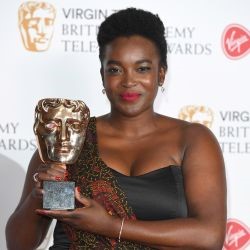 The annual British Academy Television Awards, BAFTAs, was held on Sunday at Royal Festival Hall in London.
Mosaku won for her performance in ‘Damilola, Our Loved Boy’, seeing off competition from Siobhan Finneran (Happy Valley), Vanessa Kirby (The Crown) and Nicola Walker (Last Tango in Halifax). Damilola, Our Loved Boy produced by BBC1’s Happy Valley and one-off BBC drama had all three nominations.

The Zaria, Nigeria-born actress migrated to Manchester, England and graduated from the Royal Academy of Dramatic Art in 2007.

She made her stage debut in a production of Pedro Calderón de la Barca’s The Great Theatre of the World and appeared in Batman Vs Superman: Dawn of Justice.

‘Damilola, Our Loved Boy’ is the story of Damilola Taylor, a Nigerian boy, who was killed in Peckham, London, in 2000, in what became one of Britain’s most high-profile killings. Several young boys were cleared of murder charges after a lengthy trial, and later two brothers were convicted of manslaughter.

In November 2016, a 90-minute television drama depicting the events leading to his death and the Taylor family’s search for justice premiered on the BBC.

Damilola was born in Lagos, Nigeria, to Richard and Gloria Taylor. He attended Wisdom Montessori School, Ikosi, Ketu, Lagos before he travelled to the United Kingdom in August 2000 with his family.