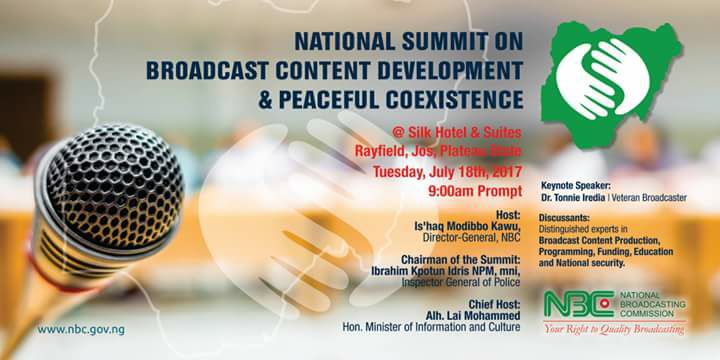 Nigerian broadcasters have converged on Jos, the Plateau state capital for their annual summit organised by industry regulator the National Broadcasting Commission NBC.

The theme of this year’s summit is “Broadcast Content Development and Peaceful Coexistence”. It reflects the tense security situation in Nigeria amid the clamour for secession by some parts of the country, the continuing Boko Haram insurrection in the northeast, agitated calls by the politically marginalised across the country for restructuring, herdsmen and farmers clashes, kidnapping and the general rising crime wave nationwide. 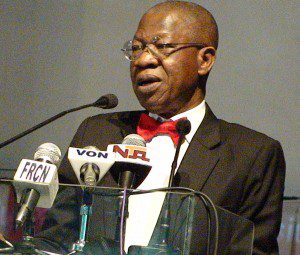 In a speech at the opening ceremony, Minister of Information and Culture, Alhaji Lai Mohammed, decried the tension in the country while he drew parallels between the body’s need for food and unhealthy junk food. The Information Minister said, “It follows, therefore, that junk information is not good for our health”. He, therefore, advised content managers to be very sensitive to the impact of their broadcast to the stability and development of the country.

Alhaji Mohammed particularly cautioned media content managers against hate speech and inciting groups against each other. Rather he stressed the need for broadcast managers as “critical gatekeepers of information to be careful, creative and purposeful, especially in these hard times”. 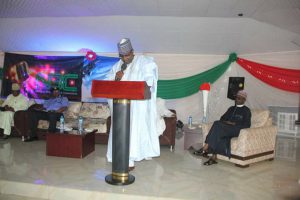 In his speech, the Director General of NBC, Mallam Modibbo Kawu, regretted that soldiers have been deployed to contain security challenges in 28 out of 36 states in Nigeria and urged the media to work towards curbing the misunderstandings usually responsible for such challenges. 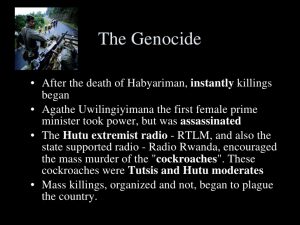 Kawu recalled that the genocide in Rwanda was caused by similar hate speech and advised strict adherence to the broadcasting codes warning that no radio or television station was too small or too big to be shut down.

With over 500 licensed radio and television stations operating in the country, Nigeria easily has established itself as the biggest broadcast market in Africa. Notwithstanding the phenomenal growth of the broadcast sector in Nigeria, it is still inundated with developmental concerns such as manpower development, standardisation of equipment, regulatory compliance monitoring, and deployment of technology, funding and harnessing marketing potentials.

But perhaps the broadcast sector’s most pertinent challenge is the Digital Switch Over DSO, thrice postponed since the initial 2015 deadline set by the International Telecommunication Union ITU. Only last month the NBC, midwife of the DSO programme, missed another deadline it set for itself, promising, however, to switch over in just six states by the end of the year.

Incidentally, the 2017 NBC broadcaster’s summit is taking place in Jos where the pilot DSO in Nigeria, was debuted in April last year. Even as national security issues engage the broadcast owners, operatives and stakeholders at the summit, it is not unlikely that the DSO agenda would also surface if not on the summit agenda, then in hushed tones while savouring the scenic beauty, cuisine and entertainment of J –Town.