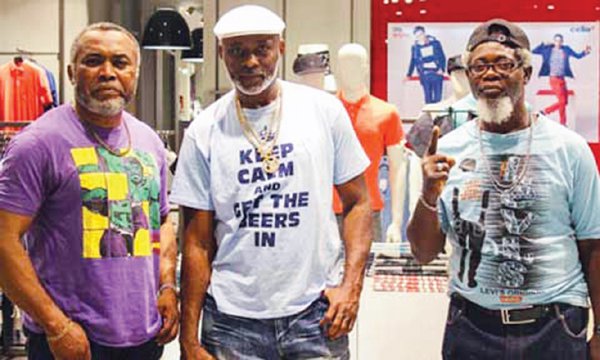 Opa William’s latest comedy film, ‘Three Wise Men’, is exploring the next opportunity, after scoring a feat as the only Nigerian film that won the international category in this year’s edition Africa Movie Academy Awards (AMAA) – the Tony Elumelu Award for Best Comedy Film Africa.

Recall that the movie, which enjoyed a glamorous premiere at the Nigerian Air Force Event Centre, Victoria Island, Lagos, on Sunday, December 4, 2016, exuded tears- induced laughter from the the VIP guests.

The movie tells the story of three aged men – Richard Mofe-Damijo (Irikefe), Zack Orji (Timi) and Victor Olaotan (Tobore) – who settled in a suburb to enjoy their retirement benefits. How they decide to spend this retirement money remains highly humorous and delightful to viewers.

The pack is led by Irikefe, 64, a divorcee with three failed marriages after five children and refuses to remarry. Irikefe decides to live alone as his covetous children are now grown and also live on their own but patiently waiting for him to die so they can swoop on whatever is left of him.

Irikefe is aware of his children’s intentions and wants to make sure he exhausts every savings of his before death. Upon his retirement he refurbishes his flat, buys a laptop, a nice sports car supposedly meant for a young man, and goes for shopping, for jeans, T-shirt, Papa’s Cap, sneakers and everything ayoung mann could dream of.

The three men become an item, as Irikefe introduces them to his world of fun, from tracking girls on Facebook, Twitter, Instagram, joy riding and picking the finest of young girls home for a nice time, to clubbing.

Irikefe is the yippee-happy-go-old guy man, who sags and wears tattoos. He loves snapping selfies and posting them on his social media pages.

CULLED FROM THE NATION