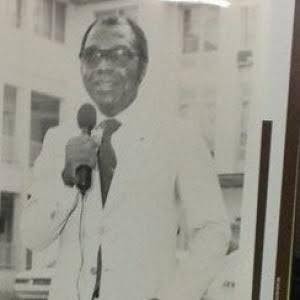 Last August marked the remembrance month of the passing away of a great sporting legend and arguably, one of Nigeria’s finest ace radio commentator, the inimitable Ernest Okonkwo.

Having been privileged to listen to his countless commentaries during the late 70’s and 80’s, I am constrained to write a glowing and fitting tribute in honour of the memory of the great man – Ernest Okonkwo.

Undoubtedly, Ernest Okonkwo and another radio commentator legend, the irrepressible Ishola Folorunsho, were rare breeds of first class radio commentators in the 1970’s – 1980’s, that had the knack of bringing to life the event they were covering to their listening audience as if they were there physically.

Ernest Okonkwo, he was as animated as he was adept at holding his audience captive. There was never a dull moment with him. Due to the inescapable fact that he was a wordsmith, he was never lost for words. With impeccable wit, he was blessed with excellent oratory skills and an abundance of apt metaphors, euphemisms and adjectives he usually employed with monotonous regularity in describing his subjects.

It was no surprise that listeners would prefer to listen to his radio commentaries while placing the volume of the TV on mute to drown out the voice of the TV commentator, as they watched the action on TV. Such was his endearing eloquence, fluidity, flexibility, creativity as well as his depth of knowledge about football, all of which he brought to bear when he held the microphone to his mouth.

In addition, he had a formidable voice which he used to convey different contrasting moments of a football match. It was high pitch at the right time, and low pitch at other times. He was quite simply, a quintessential and consummate professional that commanded respect, not only from his army of listeners but from his peers as well. 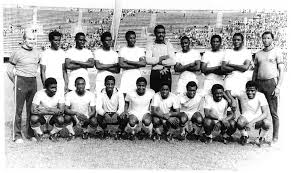 He coined nicknames for most of the footballer’s, which stuck to them nicely. He referred to Emmanuel Okala as ‘Man Mountain’ given his tall lanky figure; Aloysius Atuegbu was nicknamed ‘Blockbuster’.

Below are some of his most memorable commentary quotes during his illustrious career spanning 33 years.

“Etim Esin, he shilly-shallies, he dilly-dallies, he tries to beat one man but only succeeds in beating himself”

In the 1975 African Club of champions club match between Rangers and Ghazi El Mehalla of Egypt, Rangers lost 1-3 in the first leg in Egypt, but won the second leg in Enugu 3-0 and Ernest Okonkwo dubbed the match – “Mehalla see wahala”.

“After 90 minutes of play and extra time, the match has ended one goal apiece but a winner must emerge. Five players have on each side been selected to take the penalty kick. The players are praying to God to give them this day, but it is not who prays more but who plays better”

He starts off slowly. “As the game peters out to the dying minutes of this rather engrossing match, a long ball is floated into the Eagles 18 yard box. It seems like an eternity for it to land……(then as the action intensifies, his voice becomes racy)……Godwin Odiye, under pressure from the advancing Tunisian attacker is there to deal with it. Without looking back, he expertly heads the ball backwards toward Okala…..(his voice is now loud). ………Okala is rushing out to retrieve the loose ball. (his voice becomes louder) ……….Oh noooo…..it’s an own goal. Nigeria has scored Nigeriaaaaaa. It was a misjudged header by Odiye, as Okala goes the wrong way and the ball the other way. The ball rolls effortlessly into an empty net.
……(he tones down his voice into a sombre one).

A sad spectacle to watch……What a calamity! (His voice is now slow)…………. The Tunisians are joyous and celebrating victory. And the Nigerian camp is understandably subdued. Odiye bends down in shock as he watches the long towering figure of Emmanuel Okala walk slowly towards goal to retrieve the ball from the net. The stadium is agonisingly silent. You can hear a pin drop. The Green Eagles are rooted to the spot. They can’t believe their eyes. Even Father Tiko is motionless. It was as if someone had just died………to everyone listening, it is with sorrow in my heart that I return you to the studios. Bye-bye Nigeria!”.

“….and the ball is ballooned skywards out of the Eagles defence by Chairman Christian Chukwu, but Muda Lawal runs towards the ball and controls it superbly with the deft touch of his right boot as if it was glued to it. The midfield maestro strolls majestically with the ball. He then sprays the ball towards Chief Justice Adokie on the left of midfield, who darts to the left and cleverly cuts the ball back in one fast swift motion, losing his marker in the process……he crosses the ball and it reaches Mathematical Segun Odegbami. He exchanges a one two with Muda. Odegbami collects the ball back, sells a dummy and beats another player with a leg over……the crowd roar in delight….. he’s running to the right flank… He calculates one and two, maybe he will find Muda Lawal again at the perimeter circle, but he decides to kick a 50 meter cross close to the 18 yard box of the opponent. Blockbuster Aloysius Atuegbu intercepts the ball. He bamboozles his way past two players using his physical strength. He dribbles one, dribbles two and releases a cannon shot! It’s a goaaaallll!!! Oh no! The Egyptian goalkeeper, Ikrami Ahmed, tips the ball over the bar, just when the ball was flying into the top corner of the goal post! What an intercontinental ballistic missile…what a brilliant world class save by Ahmed. And what a great flowing move by the Green Eagles. Even Father Tiko is standing in admiration”. 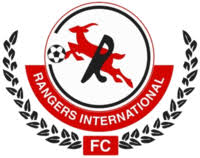 “The lanky ebony black goal hungry Ranger ranging alone in the goal area of the Water Corporation Football Club of Ibadan. Can the one man riot squad make it four for Rangers? A hat trick, that is one, two, three goals are already in the kitty. Ifeanyi Chukwu means nothing is insurmountable to God. Four goals are also not beyond the ability of Ifeanyi Chukwu Onyedika. It is a goaaaaal! ………goal number four for the indomitable Rangers International Football Club of Enugu, all scored by Ifeanyi Chukwu Onyedika” 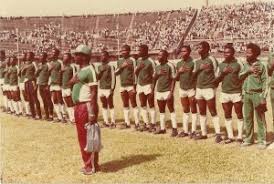 In the 1989 U-20 World Quarter-final match between the Soviet Union and Nigeria in Saudi Arabia dubbed the ‘Damaan Miracle’, Okonkwo was at his inimitable best. Russia was leading 4-0 with fifteen minutes left to end the match.

Undaunted, and with a sheer determination to at least reduce the embarrassing scoreline, the Flying Eagles equalised to make the scoreline 4-4. All the while, Okonkwo had managed to induce the hearts of many Nigerians to beat frantically in anticipation of what was to happen next. After extra time with the scoreline still the same, then came the penalty shootout and the last spot kick to decide the eventual winner to meet the USA in the semi final, was to be taken by Samuel Elijah.

In a brief but succinct moment, Okonkwo gave a vivid illustration of the confrontation that took place in the Bible involving Prophet Elijah and the prophets of Baal. After his narration, Okonkwo then switched back to the action at hand and said “….and now we have Elijah of Nigeria. Give us this day. The whole country is on your shoulder, you cannot afford to fail your country. And he moves, 1 ,2 , 3, 4 it’s a goooooooooooaaaaal. This is a miracle….God of soccer is a Nigerian”

Since the demise of Ernest Okonkwo, radio commentary has never been the same again. One wonders what appropriate nickname he would have given world class players like Messi, Ronaldo or Suarez. His apt description of any football match will be remembered by all, particularly the older generation. He brought joy and delighted ardent football fans with his unique brand of commentary and affable personality. He was quite simply irreplaceable.

May his soul continue to rest in peace